The basic principles and typical implementation of time-domain thermoreflectance (TDTR) are described.

A mode-locked Ti:sapphire laser is used as the light source, which emits a train of ~100 fs, 80 MHz light pulses at a central wavelength of 800 nm. A half-wave plate (HWP) is used to give any polarization to the incident laser, and a polarizing beam splitter (PBS) installed after the HWP reflects vertically polarized light and transmits laterally polarized light. With these components, the laser beam can be split into a pump beam and probe beam at an arbitrary intensity ratio, which are simultaneously cross-polarized with each other. Both the pump and probe beams are focused on the sample surface by the same objective lens.

A thin metal film with a large CTR is formed on the sample surface as a transducer. The CTR of a transducer is determined by the combination of the metal material and the wavelength of the pump light; for example, Al and Au exhibit large CTR values at wavelengths of 800 nm and 488 nm, respectively. However, even in this case, the CTR is small (usually 10-5 - 10-4 /K); hence, TDTR uses frequency modulation and a lock-in amplifier to detect a weak thermoreflectance signal in strong background noise.


The pump beam is modulated at a frequency in the range of 0.1 - 20 MHz using an electro-optic modulator (EOM), resulting in the modulation of the thermoreflectance signal at the same frequency. The upper limit of the modulation frequency is restricted to 40 MHz by the Nyquist criterion (half of the repetition rate of the pump laser, i.e., 80 MHz). In practice, 20 MHz is almost the maximum frequency, because of the poor signal-to-noise ratio at higher frequencies. The EOM frequency serves as a reference for the lock-in amplifier used for selective extraction of the thermoreflectance signals. 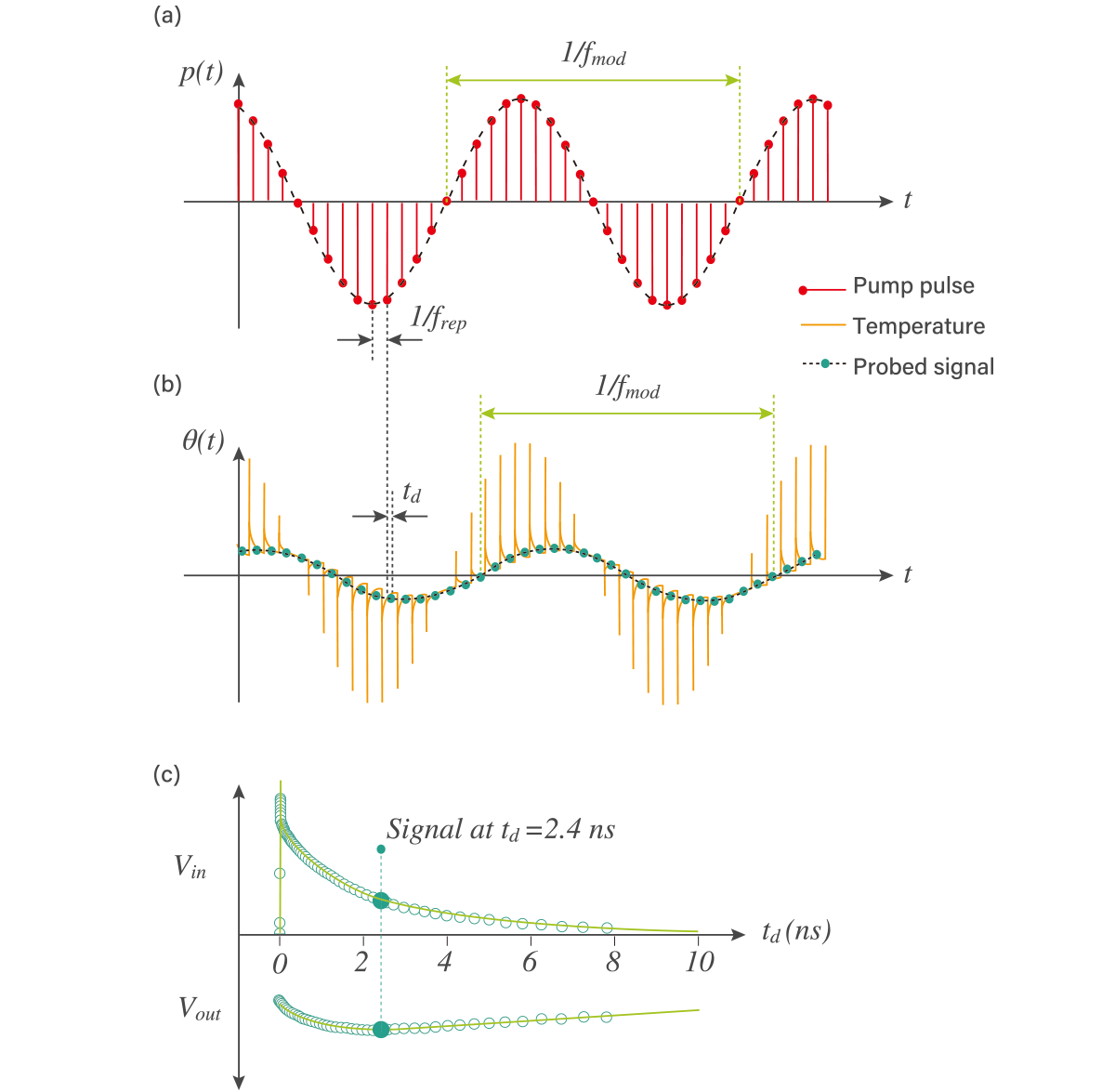 Figure 2. (a) Modulated pump pulses at frequency fmod. (b) Surface temperature response to the pump pulses (orange solid curve) and probed signals at a fixed delay time td (black dashed curve), which show the same frequency as the pump pulses. (c) Measurements are repeated at different td values, yielding Vin and Vout, which correspond to the in-phase signal and out-of-phase signal, respectively, of the lock-in amplifier.


The probe beam is delayed with respect to the pump beam by a mechanical moving stage and then focused on a sample through the same objective lens as the pump beam. Assuming that the speed of light is 3.0 x 108 m/s, extending the optical path by 0.3 mm corresponds to a 1 ps delay of the probe beam. Although the stage can be moved far more precisely to create a time delay of a few femtoseconds, the temporal resolution is limited by the laser pulse width (approximately 100 fs).


The maximum observable relaxation time is limited by the time interval between the pump pulses, i.e., 12.5 ns (=1/80 MHz). The thermal diffusion time τ of a sample can be estimated as


TDTR measures changes in the thermoreflectance signal over a time interval of 12.5 ns while manipulating the delay stage to change td.


The lock-in amplifier outputs the in-phase Vin (the real part of the output) and out-of-phase Vout (the imaginary part of the output) at the modulation frequency. Vin and Vout represent the amplitude and phase of the thermoreflectance signal, which are given as R = −Vin/Vout and φ = tan-1(Vout/Vin), respectively. The thermal properties are evaluated by fitting either of them using a thermal-transport model and adjusting the free parameters (unknown thermal properties).


Regarding the multilayered film sample, there are several unknown thermal properties, such as the volumetric heat capacity C, in-plane thermal conductivity Kr, cross-plane thermal conductivity Kz, and interface conductance G. In most cases, a large laser spot size (5–20 μm) and high modulation frequency (1–10 MHz) are selected as the measurement conditions, which results in quasi-one-dimensional thermal transport. In this case, the TDTR signals are most sensitive to the thermal properties in the cross-plane direction, and both Kz and G can thus be determined simultaneously.


In addition, the pump pulse induces an acoustic wave that propagates through the transducer and is reflected back to the surface owing to the acoustic mismatch between the transducer and the sample. This phenomenon can be observed as a small peak called an “acoustic echo,” which appears in the early part of the decay signal. By analyzing the position of this peak and the speed of sound in the metal, the thickness of the transducer film can be precisely measured.